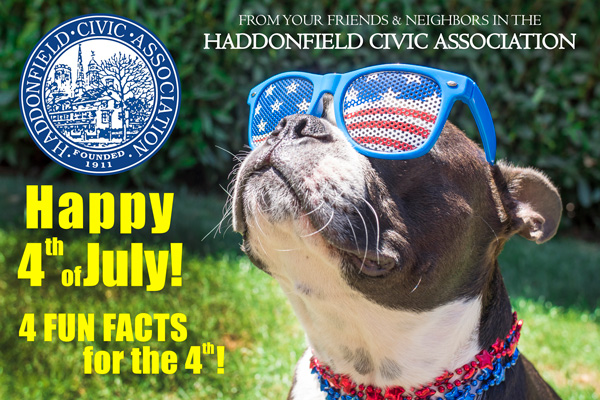 On July 2nd, 1776, the Continental Congress voted in favor of independence, and two days later delegates from the 13 colonies adopted the Declaration of Independence, a historic document drafted by Thomas Jefferson, our 3rd president, and Founding Father. John Adams, our 2nd president, and Founding Father, believed that July 2nd was the correct date on which to celebrate the birth of American independence, and would reportedly turn down invitations to appear at July 4th events in protest. Adams and Thomas Jefferson both died on July 4, 1826—the 50th anniversary of the adoption of the Declaration of Independence.

Both British and American forces encamped at Haddonfield or marched through here during various campaigns. Lafayette was among the leaders of the Revolution who was known to have stayed in the town during the war. In 1904 the Indian King Tavern became the first historic site purchased by the State of New Jersey.

The “Guard House” building in Haddonfield stands across the street from the Indian King Tavern. It was built before the Revolutionary War and is now used as office space. However, a plaque on the building says that it served “during the Revolutionary War as a guard house for persons suspected of aiding the British cause and brought for trial before the Council of Safety, then meeting in the Indian King.”

Learn More About Our Awards Below:

The Haddonfield Civic Association presents the Alfred E. Driscoll Community Service Award honoring the late Governor Driscoll, a distinguished citizen of Haddonfield and the State of New Jersey.  The award was renamed in 1975 to recognize uncommon effort on behalf of the community with the intention that those who receive it will inspire others, and that it will encourage broader participation in the activities in the Haddonfield community.

Named after Robert Bradshaw (HCA president 1920-1925). Mr. Bradshaw had a strong interest in the youth of the community and developed an essay competition that served to encourage awareness of the need for participation in civic affairs. Through their writing students give thoughtful consideration to the particular subject proposed and express themselves. In 1931 four years after his death, the Civic Association paid tribute to its late Past President by renaming the competition the Robert Bradshaw Memorial Essay Contest. The HCA continues this tradition by providing a prompt annually to HMHS students based on civic areas. The essay are submitted by seniors, and conducted at HMHS under the supervision of the English Department. The essays are judged by the HCA BOG committee.

An annual award is made to commemorate Harry Kaufmann, a member of the Haddonfield Civic Association and president from 1971 to 1973.  Mr. Kaufmann was a long-time Haddonfield resident and enthusiastic amateur in the world of the performing arts.  As an employee of the Philadelphia Inter-State Dairy Council, he illustrated children’s books and sang and played his way through an educational radio program.  He wrote, composed and directed a musical commemorating his beloved hometown, “Kings’s Road”, winning a Freedom Foundation Award.  As importantly, however, he was committed to assisting those around him, not looking for recognition and thanks, just looking to help. Accordingly, this award seeks to recognize a HMHS senior who exemplifies his twin passions of civic engagement and participation in the performing arts.

The HCA Board recognizes the visual arts program has been so strong, growing in stature and numbers (thanks to the hard work of the faculty and administrative support), that it deserved it’s own award. The Quanci Visual Arts scholarship was first awarded to an HMHS senior in 2017. It is named for the Lisa Quanci, serving on the HCA Since 2005. She spearheaded this 3rd Scholarship award over the years to recognize the triad of the Arts: literary, performing and visual arts.