Since 1931, the Haddonfield Civic Association has recognized individuals or organizations that have made a lasting, positive impact on our town in a volunteer capacity. Each year, the HCA presents the Alfred E. Driscoll Award honoring the late Governor Driscoll, a distinguished citizen of Haddonfield and the state of New Jersey.

The Award acknowledges an uncommon effort made on behalf of the community, with the intention that those who receive it will inspire others, and that it will encourage broader participation in civic activities in the Haddonfield.

See Past Recipients below. 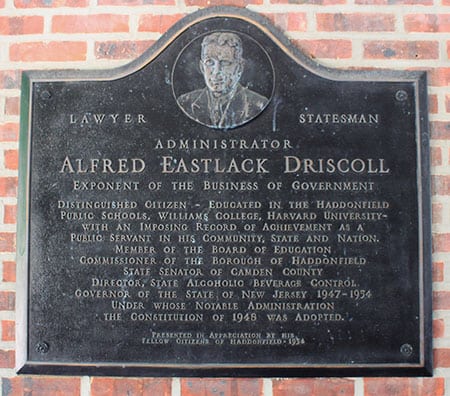 Who Was Alfred E. Driscoll?

Alfred E. Driscoll, distinguished Haddonfield citizen, HMHS Class of 1921, was a Governor of the state of New Jersey from 1947-1954.

He was in public service for many decades including:

While building the NJ Turnpike, the Garden State Parkway, and NJ Palisades were all remarkable achievements, he also accomplished the following:

1) Desegregating all NJ public schools in 1948.

3) He was able to get NJ to finally adopt a new State Constitution.  It included the requirement of a thorough and efficient education for all NJ students.  He believed that a well-educated populace was important to the success of the state.  Many other progressive ideas in there too.

4) He acquired and incorporated the Wharton Tract, Batsto, Island Beach, the Walt Whitman House, and vast other tracts into the NJ Park System.  Two primary reasons – he believed that all residents should be able to enjoy the natural beauty of the state and sought to protect natural resources for the benefit of the populace, ie. underground fresh water aquafers.   He was a great believer in preserving open space and the environment.

He truly was a progressive, inclusive, and visionary man.

(Who was Alfred E. Driscoll was written by the Haddonfield Alumni Society – visit them at  https://HMHSalumni.org/)